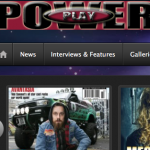 Out of the ashes of another fine British rock band, Zero Navigator, comes The Whiskey Poets, who started out as a small, country/blues outfit but have become much more than that with their unpretentious yet cool as hell debut ‘Low Country’. Now, there is a lot to like about this album; for one, the man behind it all, the shadowy, bestselling thriller writer RJ Ellory, has thrown all his influences into the pot, making this a stroll through a great expanse of musical countryside, yet he never strays from the path of dark blues-based rock. True, most of the songs could’ve come out of the southern states of the US, but this is no retread over old ground. With ELO’s Martin Smith on board, there are a lot of rich instrumental touches that bring out a strong, whiskey-soaked vibe, as if you could be listening to these guys break their hearts on a Louisiana stage.
Ellory is the star of the show, with his soft and sincere croon, and with him being a writer and all, it’s no surprise to find that the lyrics are well-crafted vignettes to loneliness, family, and hope. The highlights are found in refined numbers such as ‘Ghost Of My Religion’, ‘The Lesson’, and ‘Losing My Heart’, a song that could’ve had chart potential in a different time. But this album was meant to be enjoyed as a whole (Ellory’s work has that charm), so kick back, spin the album, and then get down to one of their live shows. You’ll be seeing more of them on the blues rock circuit, trust me.
BRUCE TURNBULL – Power Play magazine